The Moth (B Format Paperback)

Pull up an easy chair and settle into the most spell-binding collection of real stories you will ever read.

With an introduction by Neil Gaiman

Before television and radio, before penny paperbacks and mass literacy, people would gather on porches, on the steps outside their homes, and tell stories. The storytellers knew their craft and bewitched listeners would sit and listen long into the night as moths flitted around overhead. The Moth is a non-profit group that is trying to recapture this lost art, helping storytellers – old hands and novices alike – hone their stories before playing to packed crowds at sold-out live events.

The very best of these stories are collected here: whether it's Bill Clinton's hell-raising press secretary or a leading geneticist with a family secret; a doctor whisked away by nuns to Mother Teresa's bedside or a film director saving her father's Chinatown store from money-grabbing developers; the Sultan of Brunei's concubine or a friend of Hemingway's who accidentally talks himself into a role as a substitute bullfighter, these eccentric, pitch-perfect stories – all, amazingly, true – range from the poignant to the downright hilarious. 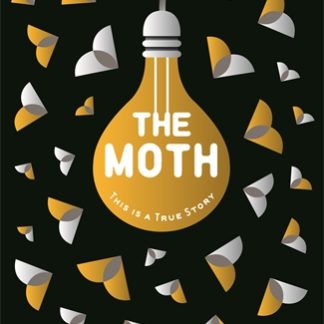 You're viewing: The Moth (B Format Paperback) £9.99
Add to basket