In Defence of Atheism (Epub)

[A] powerful attack on organised religion

In the twenty-first century, religion is making a comeback, bringing in its wake extremism of all kinds. From Christian anti-abortion campaigns to suicide bombers claiming the righteousness of Islam, we are witnessing a resurgence of fundamentalism. Michel Onfray's response to the threat of a post-modern theocracy is to lay down the principles of an authentic atheism: exposing the fiction that is God, he proposes instead a new philosophy of reason that celebrates life and humanity.

In Defence of Atheism demonstrates that organised religion is motivated by worldly, historical and political power; that the three dominant monotheisms – Christianity, Islam and Judaism – exhibit the same hatred of women, reason, the body, the passions; that religion denies life and glorifies death. Onfray exposes some uncomfortable truths: Judaism invented the extermination of a people; Jesus never existed historically; Christianity was enforced with extreme violence by Constantine; Islam is anti-Semitic, misogynist, warlike and incompatible with the values of a modern democracy. 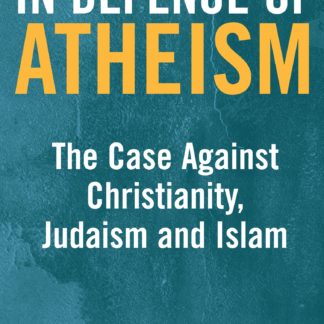 You're viewing: In Defence of Atheism (Epub) £9.99
Add to basket