'Ambitious, original… a beautiful experiment in its own right' Maggie Nelson
'A startling, dazzling act of resurrection' Michelle Alexander, author of The New Jim Crow
'Exhilarating….A rich resurrection of a forgotten history' The New York Times

At the dawn of the twentieth century, black women in the US were carving out new ways of living. The first generations born after emancipation, their struggle was to live as if they really were free. Their defeats were bitter, but their triumphs became the blueprint for a world that was waiting to be born.

These women refused to labour like slaves or to accept degrading conditions of work. Wrestling with the question of freedom, they invented forms of love and solidarity outside convention and law. These were the pioneers of free love, common-law and transient marriages, queer identities, and single motherhood – all deemed scandalous, even pathological, at the dawn of the twentieth century, though they set the pattern for the world to come.

In Wayward Lives, Beautiful Experiments, Saidiya Hartman deploys both radical scholarship and profound literary intelligence to examine the transformation of intimate life that they instigated. With visionary intensity, she conjures their worlds, their dilemmas, their defiant brilliance. Wayward Lives recovers their radical aspirations and insurgent desires, their unfinished revolution in a minor key. 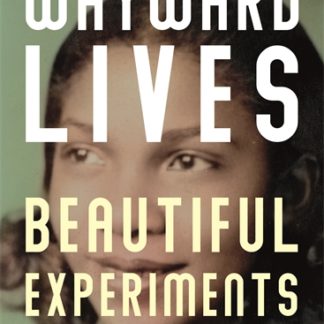