To the Friend Who Did Not Save My Life (Trade Paperback)

The cult classic that describes with devastating, darkly comic clarity the experience of living with and dying from AIDS

With a foreword by Maggie Nelson, an introduction from Frieze editor Andrew Durbin and afterword from Edmund White

'As much about friendship, intimacy, and betrayal as it is about sickness. … Brilliant' – Dazed

'The father of autofiction, the master of finding that perfect balance of truth and beauty.' Guardian
'As brutal as it is elegant</b>; shot through with a scalding and necessary rage.' – Neil Bartlett, author, Ready to Catch Him Should He Fall
'Written with urgency, clarity … it is electrifying in its searing honesty' – Colm Tóibín
'One of the most beautiful, haunting, and fascinating works in the French autofictional canon. Guibert grapples with his own AIDS diagnosis, and the death of his friend Muzil (Michel Foucault), in a dazzling piece of writing.' – Katherine Angel

After being diagnosed with AIDS, Hervé Guibert wrote this devastating, darkly humorous and personal novel, chronicling three months in the penultimate year of the narrator's life. In the wake of his friend Muzil's death, he goes from one quack doctor to another, from holidays to test centres, and charts the highs and lows of trying to cheat death.

On publication in 1990, the novel scandalized French media, which quickly identified Muzil as Guibert's close friend Michel Foucault. The book became a bestseller, and Guibert a celebrity. The book has since attained a cult following for its tender, fragmented and beautifully written accounts of illness, friendship, sex, art and everyday life. It catapulted Guibert into notoriety and sealed his reputation as a writer of shocking precision and power. 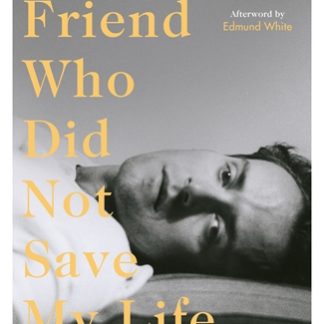 You're viewing: To the Friend Who Did Not Save My Life (Trade Paperback) £10.99
Add to basket