On the Floor (Epub)

The higher you fly, the further you'll fall

In the City everything has a price.

At the age of twenty-eight, Dubliner Geri Molloy has put her troubled past behind her to become a major player at Steiner's investment bank in London, earning £850k a year doing business with a reclusive hedge fund manager in Hong Kong who, in return for his patronage, likes to ask her about Kant and watch while she eats exotic Asian delicacies.

For five years Geri has had it all, but in the months leading up to the outbreak of the Gulf War in 1991, her life starts to unravel. Abandoned by her corporate financier boyfriend, in the grip of a debilitating insomnia, and drinking far too much, Geri becomes entangled in a hostile takeover involving her boss, her client and her ex. With her career on the line as a consequence, and no one to turn to, she is close to losing it, in every sense.

Taut and fast-paced, On the Floor is about making money and taking risks; it's about getting away with it, and what happens when you're no longer one step ahead; ultimately, though, it's a reminder to never, ever underestimate the personal cost of success. 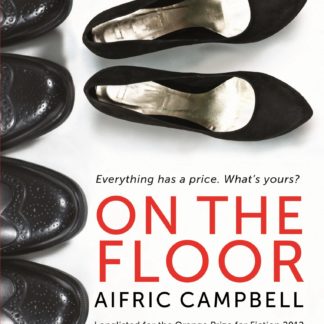