On a balmy evening in late March, an oligarch’s wife hosts a party on a superyacht moored in the Maldives. Tables cover the massive deck, adorned 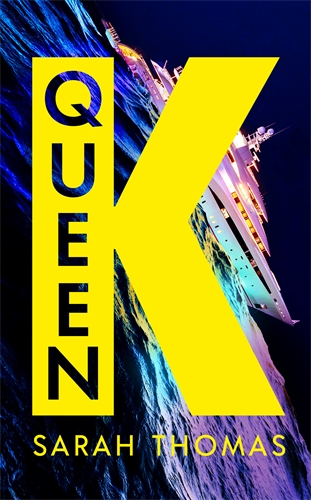 with orchids, champagne bottles, name cards of celebrities. Uniformed staff flank a red carpet on the landing dock. This is what Kata has wanted for a long time: acceptance into the glittering world of high society. But there are those who aim to come between Kata and her goal, and they are closer to home than she could have imagined.

Witness to the corruption and violence underneath the shiny surfaces is Mel, a young English woman employed to tutor Kata’s precocious daughter and navigate her through the class codes of English privilege. Now the closest Mel gets to such privilege is as hired help to the wealthy, and she is deeply resentful.

Exquisitely written and deliciously unreliable, Queen K takes the reader to some of the most luxurious places in the world. But a dark refrain sounds from the very beginning of the story and grows towards its operatic finale: a novel about insatiable material desire can only ever be a tragedy.

I went to dinner with some old school friends the other night and before I’d been there ten minutes they were asking me about that family I used to work for, the billionaires. Everyone does that. Everyone’s heard the story and knows I was there that night. ‘Something crazy happened, didn’t it,’ they say, ‘with that oligarch’s wife; didn’t she just disappear or something?’ They look at me and depending on the mood I’m in I brush them off with an arch quip or I try quite seriously to explain it all: how it came to that, how Kata got it so badly wrong.

On this particular night, I was looking at those girls from school arrayed around the dinner table, in their merino knits, comfortable in their professions: lawyer; TV producer; book editor. I caught the whiff of glibness, that I was being patronised. ‘So exotic!’ said Charlotte. ‘Being a tutor. Makes office life seem very boring!’

Charlotte had seen I was in the country from one of my Instagram stories. I’d been packing up the last of Mum’s stuff and found a big book of photographs, all these pictures from Mum’s youth, on the seafront at Dartmouth with the sailing yachts behind her, hair blown about by that south-coast wind.

‘Wow, you look like her!’ Charlotte said. ‘Come to dinner on your way back through London. I’ll invite some of the others.’

When Charlotte led me down the hall to her kitchen it all came back to me: the lust I used to have for houses like this, the sounds of the street dying away as we passed a sitting room with heavy curtains, a faded sofa full of cushions, a fireplace and, on either side of the fireplace, blue and white china urns. Charlotte had seemed so helpless to me when we first met aged thirteen, both new at a girls’ boarding school in the West Country. There was some incident in the library, a mouse ran over her books and she screamed, then people followed her round chanting: ‘Library Mouse, Library Mouse.’ It irritated me, and one night in the dinner queue I told everyone how lame they were being. ‘Teasing Charlotte is mean and lazy, it also happens to be totally risk free. Now, how about her,’ I said, pointing to this girl a few years above us, someone beautiful and fascinating and tyrannical, known to be vicious in her punishments.

Push up, not down, I suppose is what I meant. Back then, I saw Charlotte as someone in need of my protection. It’s relentless, isn’t it, our need to order ourselves, to form hierarchies? When we were kids together at that school we were ordered by our wits, it was cruel and merciless. In the end of course we are ordered by our capital: it is cruel, it is merciless.

I think I was always aware Mum was heading towards an act of mortal stupidity, but I never saw it coming with Kata. Two such weak women. I grew up wishing my mother could have tried to hide her weaknesses from me, that she could at least have pretended to be some kind of a safe haven. So I could understand very well Alex’s feelings towards Kata, and I could even understand the role she played in the whole sad thing. She clung on to love for her mother for a long time, before that love turned to disgust. She was so sweet and so gentle, my little pupil. I could never quite work it out: was she someone I needed to protect or was she undeserving of my protection, simply because she was so rich?

The email notification was on my phone: my return flight to Vienna the very next day, my apartment, my new life. It really was there, waiting for me. I brought it all up before me in my mind: drinking a cup of coffee in my kitchen, dressing and getting on the underground to the kindergarten where I worked, late afternoons in the cafés, evenings with Jakob and friends. I called it to myself and felt its warmth fill me, then expand outwards. It radiated through Charlotte and the others, and Charlotte’s million- pound house in Clapham that her parents had bought her. I separated Charlotte from my envy, for just a moment: I looked at her across the table, at her face as she lifted the bottle of wine brought it towards my glass, the light freckles over her nose and the top of her cheeks, and for a moment I thought, Maybe we are all helpless, maybe we are all hostage. I think Kata was helpless and hostage from the beginning to the end of her life, and she was the richest of us all.