Summer has finally arrived with a blazing heatwave, and we have your reading covered with some books to celebrate the heat and others to cool you down (even if it’s by the coolness of the author). So pick up a book and a fan and get ready to enjoy or escape the heat. Knowing the UK weather, we know it won’t last long!

Tell us what you’re reading during this heatwave – @SerpentsTail 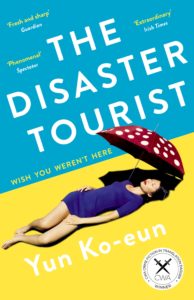 A satirical Korean eco-thriller with a fierce feminist sensibility.

WINNER OF THE CWA CRIME IN TRANSLATION DAGGER

Yona has been stuck behind a desk for years working as a programming coordinator for Jungle, a travel company specialising in package holidays to destinations ravaged by disaster. When a senior colleague touches her inappropriately she tries to complain, and in an attempt to bury her allegations, the company make her an attractive proposition: a free ticket for one of their most sought-after trips, to the desert island of Mui.

She accepts the offer and travels to the remote island, where the major attraction is a supposedly-dramatic sinkhole. When the customers who’ve paid a premium for the trip begin to get frustrated, Yona realises that the company has dangerous plans to fabricate an environmental catastrophe to make the trip more interesting, but when she tries to raise the alarm, she discovers she has put her own life in danger. 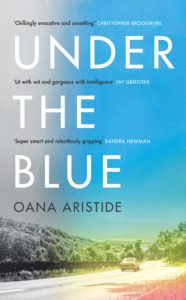 UNDER THE BLUE – Oana Aristide

A lead debut novel: a literary thriller about a pandemic, the rise of AI, and how – or why – we might save the human race.

A road trip beneath clear blue skies and a blazing sun: a reclusive artist is forced to abandon his home and follow two young sisters across a post-pandemic Europe in search of a safe place. Is this the end of the world?

Meanwhile two computer scientists have been educating their baby in a remote location. Their baby is called Talos, and he is an advanced AI program. Every week they feed him data, starting from the beginning of written history, era by era, and ask him to predict what will happen next to the human race. At the same time they’re involved in an increasingly fraught philosophical debate  about why human life is sacred and why the purpose for which he was built – to predict threats to human life to help us avoid them – is a worthwhile and ethical pursuit.

These two strands come together in a way that is always suspenseful, surprising and intellectually provocative: this is an extraordinarily prescient and vital work of fiction – an apocalyptic road novel to frighten and thrill. 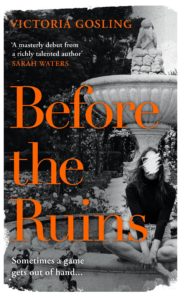 BEFORE THE RUINS – Victoria Gosling

One long, hot summer Andy and her friends begin a game that will take their whole lives to play out.

Andy believes that she has left her past far behind her. But when she gets a call from Peter’s mother to say he’s gone missing, she finds herself pulled into a search for answers.

Bored and restless after their final school exams, Andy, Peter, Em and Marcus broke into a ruined manor house nearby and quickly became friends with the boy living there. Blond, charming and on the run, David’s presence was as dangerous as it was exciting. The story of a diamond necklace, stolen from the house fifty years earlier and perhaps still lost somewhere in the grounds inspired the group to buy a replica and play at hiding it, hoping to turn up the real thing along the way. But the game grew to encompass decades of resentment, lies and a terrible betrayal.

Now, Andy’s search for Peter will unearth unimaginable secrets – and take her back to the people who still keep them. 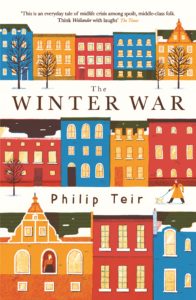 So you thought life in Scandinavia was perfect?

On the surface, the Paul family are living the liberal, middle-class dream in Helsinki. Max Paul is a renowned sociologist and his wife Katriina has a well-paid government job. They live in a beautiful apartment in the centre of the city. But look closer and the cracks start to show.

As he approaches his sixtieth birthday, the certainties of Max’s life begin to dissolve. His wife no longer loves him, and his grown-up daughters – one in London, one in Helsinki – have problems of their own.  So when a former student turned journalist shows up and offers him a seductive lifeline, Max starts down a dangerous path from which he may never find a way back.

Funny, sharp, and brilliantly truthful, Teir’s debut has the feel of a big, contemporary, humane American novel, but with a distinctly Scandinavian edge. 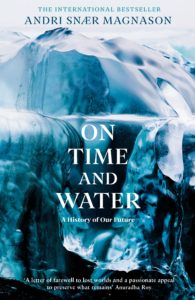 Icelandic author and activist Andri Snær Magnason’s ‘Letter to the Future’, an extraordinary and moving eulogy for the lost Okjökull glacier, made global news and was shared by millions. Now he attempts to come to terms with the issues we all face in his new book On Time and Water. Magnason writes of the melting glaciers, the rising seas and acidity changes that haven’t been seen for 50 million years. These are changes that will affect all life on earth.

Taking a path to climate science through ancient myths about sacred cows, stories of ancestors and relatives and interviews with the Dalai Lama, Magnason allows himself to be both personal and scientific. The result is an absorbing mixture of travel, history, science and philosophy. 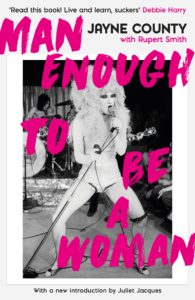 MAN ENOUGH TO BE A WOMAN – Jayne County

Born in rural Georgia in 1947, Jayne moved to New York and became part of the 60s art scene surrounding Andy Warhol’s Factory. Jayne’s story follows the arc of LGBT liberation in the US – she came of age living hand-to-mouth, faced off against police at Stonewall and came out as a trans woman while she was touring Europe with her band. She went everywhere and met everyone and lived to tell the tale.

Man Enough to Be a Woman is the funny, fierce memoir of Jayne’s extraordinary journey, now including a new epilogue where she reflects on how the world has (almost) caught up with her.