From acclaimed author of The Warlow Experiment, the moving story of a mother and daughter separated in Regency England 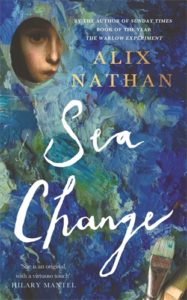 The last Eve saw of her mother was a wave from the basket of a rising balloon. A wilful, lonely orphan in the house of her erratic artist guardian, Eve struggles to retain the image of her missing mother and the father she never knew. In a London beset by pageantry, incipient riot and the fear of Napoleonic invasion, Eve must grow into a young woman with no one to guide her through its perils.

Far away, in a Norfolk fishing village, the Rev Snead preaches hellfire and damnation to his impoverished parishioners and oppressed wife. Snead illustrates his sermons with the example of a mute woman pulled from the sea, over whom he keeps a very close watch indeed.

will Ascend in his gas Balloon

during an elegant Afternoon Breakfast

given by the Directors of the Pic Nic Society

in recognition of the new Peace of Amiens.

M Garnerin will be accompanied by

and, to prove the Safety of such Travel to

Members of the Fair Sex,

They walk through the crowd towards the enormous balloon, thirty feet in diameter, forty-five feet high, as big as a four-storey house, shifting gently against its anchoring ropes despite a hot,

almost breathless day. Its alternate dark-green and yellow segments are encased in a net, its oblong car draped in tricolours and Union Jacks. On the ground around it lies a cartwheel shape of barrels and pipes in which acid and iron filings have generated the hydrogen that fills the great globe.

The aëronaut waits for them in an elegant blue coat and French hat bearing the national cockade, chatting to bystanders and smiling, as if he were a showman at Bartholomew Fair encouraging people into his booth. Jacques Garnerin is sinewy and slight, his noble nose and thin, sharp features wind-burned, his skin toughened like a sailor’s.

Sarah, in a large beribboned bonnet, her best dress with its low neckline and short sleeves fashionable enough to quell her anxiety about what to wear, steps forward slowly, weighed by regret. Her jibe, fired off in annoyance, that women are just as able to fly in balloons as men, has brought her here. She is red with heat and self-consciousness. It’s not unlike the first day she stood at the bar in her father’s coffee house, replacing her newly dead mother, when men scanned her perpetually till she felt skinned.

Joseph strides ahead, can’t stop himself, bags and satchels hung about his tall, ungainly person.

Sarah turns to hug her daughter Eve, to kiss the girl in her pretty blue gown, who looks with bright eyes from her to the balloon and back, understanding only that her mother has chosen to travel in it, aware of a vast murmuring, a heaving sea of smiles.

‘I’ll be back soon, my love. Tonight, I hope.’ She moves over to the basket, wanting it all to be over.

Garnerin, the small, foreign entertainer, hands his two British aëronauts up steps into the car, springs into it like a boy. There’s only just room, for in the centre is ballast, bags of sand marked in quantities from kilos down to grams, suspended by four cords from the hoop at the base of the balloon’s netting. Attached to the car’s ropes are a thermometer, impressive compass, telescope and a barometer for measuring altitude. Baskets of provisions are stowed in lockers under the seat where Joseph will sit together with all his boxes of pens, pencils, chalks, brushes, paint, sketchbooks and blocks, perspective glasses and his own telescope. Jacques calculates that large Joseph, his equipment and a basket of food and drink will balance the weight on the opposite side of the car to Sarah and himself.

A band strikes up ‘God Save the King’. The Official Aëronaut of France, fidgeting throughout, stands to attention for the succeeding tune, which no one recognises.

‘But that is not the “Marseillaise”,’ says Joseph, puzzled.

‘It offend Bonaparte. I tell them they must play “Veillons au salut de l’Empire”. Soon he become Emperor.’

After four verses, during which it is the crowd’s turn to fidget and chatter, Garnerin unhooks bag after bag of ballast, hands them over the side of the car until the captive balloon pulls at its tethers.

At last he signals, assistants untie the ropes, restrain the great ball solely by muscle power. The crowds hush.

A dramatic sign, the ropes are loosed, a huge cheer breaks out, the ascent begins. Sarah feels the basket leave the ground, an upward pull through her body that makes her laugh aloud. Even as

her child slips further from her, the little girl’s face blearing in her sight, her legs weaken with pleasure and she grips the car to steady herself. Jacques, so many successful flights in hand, moves about with panache, making the balloon rise slowly, letting it hang over the gardens for maximum effect. He holds a flag of the République, gives Sarah a Union Jack and, with Joseph waving his sketchbook, they all three salute the crowds thronging the Gardens and all roads that lead to Ranelagh. The great vehicle moves massively, elegantly in a north-east direction, away from the packed banks of the river, from the waterworks, the creeks and sluice gates of Pimlico fenland. Still low enough for onlookers clustered in every window and housetop, perching in trees like cawing rooks.

Joseph, breathless with excitement, sketches rapidly as they sail over Green Park and St James’s. Ducks rise up, quacking from the lakes as the huge shadow passes. Westminster to the right, Charing Cross beneath.

‘Come now, it’ll cheer a prisoner to see us fly over. At least it will distract the pelters. Here! Use my pocket telescope. I’ve not enough hands for it.’ His steel spectacles have a second set of lenses, tinted, hinged up until needed, for all like mad eyebrows.