‘I poured everything I felt about caregiving work into the novel’

‘An extraordinarily good book’ Philippa Perry
‘A riveting story’ Ottessa Moshfegh
‘Haunting, original, intelligent’ Tessa Hadley
‘Powerful and thought-provoking’ Claire Fuller
‘It has remained with me in a way few other books have ever done’ Sarah Perry 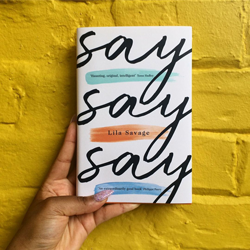 You worked for many years as a caregiver. What kind of work did you do and what drew you to the profession?

I worked as a companion for elderly people, many of whom suffered from memory loss. Usually my role was to help them stay in their homes a little longer as they lost independence over time. I helped with things like bathing and grooming and cooking and cleaning depending on the needs of the individual. I was drawn to the work in part because I have always had an affinity for older people and in part because it was best-paying job I was qualified for when I dropped out of graduate school.

Did you set out to write a novel on caregiving and the kinds of experiences you had?

I did. Once I had the idea for the novel it became a way to honor the work I had been doing and the many people I had cared for. I poured everything I thought and felt about caregiving work into the novel.

In Say Say Say it becomes clear that Ella finds it tricky sticking to boundaries that separate the professional from the personal. In your opinion, are caregivers fully prepared for the emotional as well as physical demands of a role?

I can’t speak to the experiences of most caregivers as I wasn’t trained other than helping my grandmother care for my grandfather when he had Alzheimer’s. That experience prepared me somewhat at least in terms of what to expect from the illness but I had to learn about professional boundaries on the job.

The reviews for Say Say Say have been phenomenal. Were you expecting such a response?

The reviews have mostly been lovely. I didn’t really come into this with expectations—when I started Say Say Say six years ago I wasn’t even thinking about publishing it, I just had a story to tell.

Are there other writers whose work you admire and has inspired your own?

The works of Alan Hollinghurst, Audre Lorde and Michelle Tea have each inspired me in important ways. Also my friend the poet Essy Stone’s work continually inspires me. Her first book, What It Done to Us, beautifully captures the experience of growing up working-class and queer in Evangelical Appalachia. Ottessa Moshfegh is another friend whose work I deeply admire—particularly her novella McGlue, a raw and moving story about alcoholism and much more.

Say Say Say is out now. Buy your copy from:
Waterstones
Hive
Amazon