A Q&A with The Pine Islands translator Jen Calleja

Jen Calleja is the translator of, among other works, Marion Poschmann’s The Pine Islands, shortlisted for the Man Booker International Prize 2019.  A short novel that packs a huge punch, The Pine Islands tells the story of Gilbert Sylvester, who, after dreaming his wife cheated on him, spontaneously flees to Japan. There he meets a young man, Yosa, and they travel together – one in search of death, the other a new beginning.

Congratulations on being shortlisted for the Man Booker International! We absolutely love your translation of The Pine Islands. How does it feel to be shortlisted as translator?

It feels very surreal, but I’m obviously very proud and very pleased for Marion that the book is getting this kind of recognition.

How did you get into translating books? 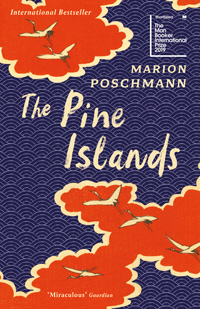 I’ve always been a writer, I probably started before my teens, so have always been interested in stories. I used to like writing my own versions of stories too, like Enid Blyton’s The Faraway Tree and The Nancy Drew Mysteries. After spending some time in Munich when I was eighteen/nineteen, I came back to England to study for a degree in media and modern literature and started reading novels in German on the side. I ended up doing a masters in German studies and learned all about literary translation while on the course and thought: that sounds like the perfect job, one that mixed writing/rewriting and German. I got offered my first book translation before I’d finished the course, out of the blue. I always say that the day I started live-translating a section of a novel I loved to my now husband was the moment I became a literary translator.

Did you talk to Marion Poschmann during the translation process? What’s the relationship between author and translator?

I tried not to disturb her too much as she was off on wild adventures, but I did send her my translation with questions about ambiguities or whether certain things were references or allusions to something, which she answered for me. She was very encouraging and has been very complimentary of the translation, which is a great feeling. I’ll be meeting her for the first time at the announcement event. The relationship between an author and translator always differs. I’ve translated writers who I’ve never met or spoken to, and I’ve translated authors who I worked very closely with and who I now consider very close friends. I’m going on holiday with one of my authors soon.

How did you find translating The Pine Islands? Did you laugh a lot?

It was a wonderful book to translate, really beautifully written. It took a lot of work to have it sound as finely wrought as the original. And yes, it’s a very darkly funny book. It really walks on a tightrope between viciously satirising and being sympathetic to the lives of men who are both privileged and trapped within patriarchal society. It’s so much more than a male mid-life crisis novel – I’ve read too many of those in both English and German. Gilbert is a tragic character, but he is so churned up by his inadequacy he projects it onto others, and this is where Marion lays Gilbert bare.

What other German books would you recommend to readers?

In English translation I would recommend Memoirs of a Polar Bear by Yoko Tawada translated by Susan Bernofsky and published by Portobello. It’s a story of three generations of polar bears (an exiled writer, a circus performer, a zoo exhibit). I will never get bored of following Tawada’s eye as she takes in the world. It won the Warwick Prize for Women in Translation 2017.